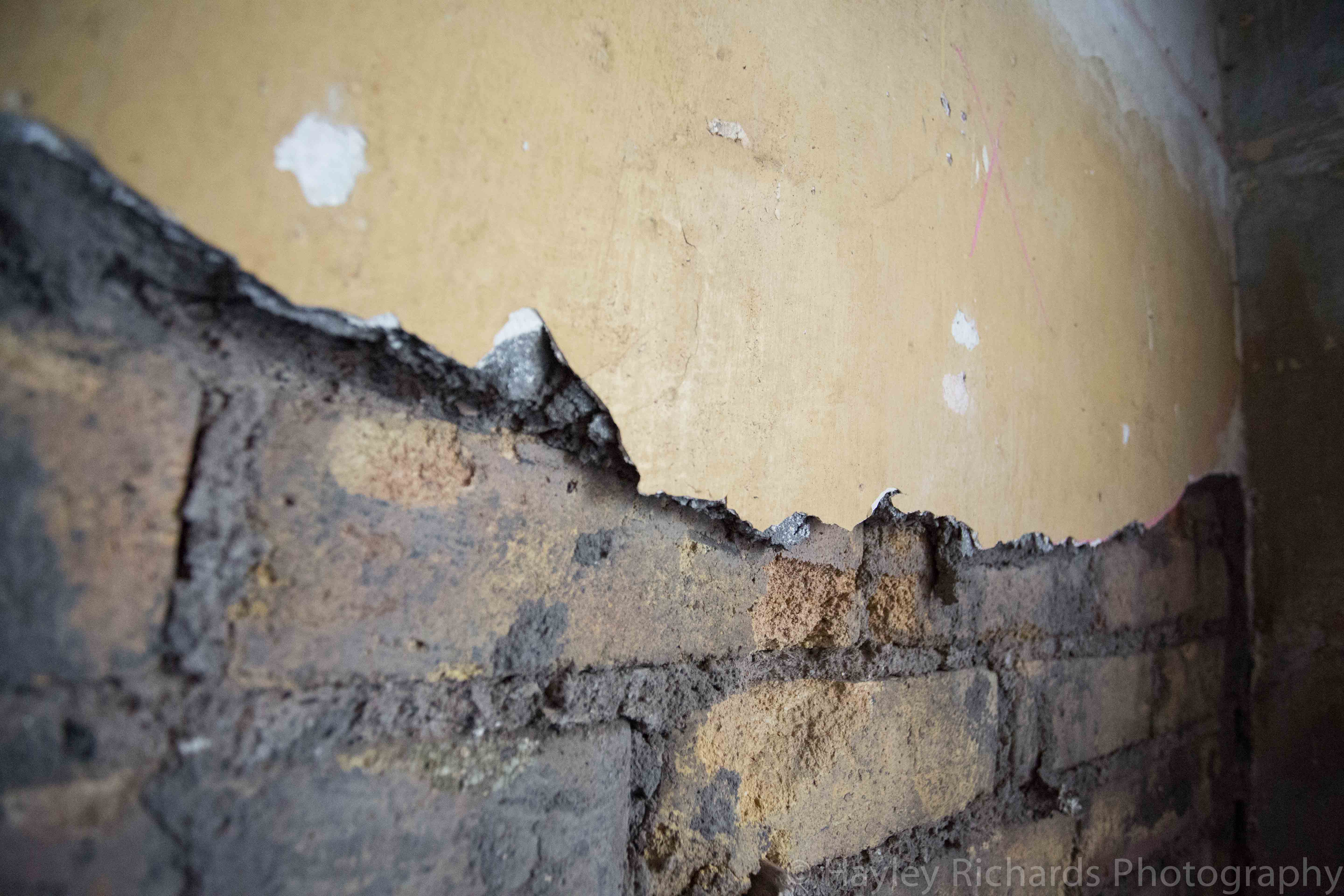 This is how the room looked after buying the house in May 2015 (the electric fire insert has been removed and carpet corners lifted) You can see the signs of damp in the alcoves halfway up the wall – starting to blister off the vinyl patterned wallpaper.

The skirting board in the alcove to the right was completely missing & had been replaced by a hastily moulded concrete creation!

This corner is in the right alcove where it abuts the external wall. You can see the cement render on the right, some kind of silver ‘waterproofing’ or damp-stop paint, various white salts escaping the wall particularly where the gypsum joins the lime plaster on the left.

Each wall had vinyl wallpaper on, in differing patterns but painted the same colour. These are all signs of ongoing, repeated attempts to ‘hold back’ the damp.

Soon after buying the house, around 1m of plaster was removed to let the wet sections of the walls dry out and ‘breathe’. This is the internal ‘spine’ wall in the middle of the house; it supports the upstairs joists & runs perpendicular to the party walls.

Prior to removal, the bottom section had a mixture of gypsum and a strip of cement at the base of the wall whereas the top section is the old black lime plaster. You can see that there is a clear darkened, damp area on the bricks and mortar to a height of around 1m.

We had thought this may have dried out more after removing the vapour impermeable coverings. However, the above photo is a full 2 years after the lower section of plaster was stripped off which should have been more than enough time for a single skin wall to dry out if it was purely historical ‘trapped’ moisture. The rule of thumb is around 1″ per month for a wall to dry out, and this is a single skin wall just over 4″ thick. There has been little change to the pattern of damp in that time. There are several theories as to the cause of this : see some further investigations & thoughts on that here.

This is the external wall at the rear of the property.  The wall to the right of the window is an internal wall with the kitchen on the other side. It was here that we found this original wallpaper :

To  the left of the window is a cement tanking type render up to 1.5m high, which is horrendously difficult to remove. It is incredibly strong in compression so hitting it with a cold chisel and lump hammer is very hard on the body.

Initially we used a 5kg Titan SDS drill from Screwfix with a chisel bit set to hammer action only. However we were advised that removal by hand is much less damaging for the building due to the reduced vibration – especially since the mortar is even softer than it should be due to the damp issues. The cement render sticks to the faces of the bricks causing lots of damage when removed even when done with the greatest of care. It is tiresome, time-consuming and frustrating work.

Never let anyone ‘tank’ or apply waterproofing plaster to your old solid-walled property. It is a temporary fix at best and is very hard to undo, causing misery to occupants faced with a hard, cold, damp wall that is difficult to rectify in the future.

Note the salts (aka efflorescence) crystallising on the surface of the cement which have formed since we stripped the lower section of the wall two years ago :

Leaving the cement in place is also damaging for the building. Whilst it originally would have be a well-meaning yet misguided attempt to hold back the damp, in reality all it has done is make things worse, driving the moisture higher up the wall until it finds somewhere to escape (the junction with the original lime plaster which is suitably permeable).

Surrounding the bricks in this wall we found soaking wet mortar that would stick to your fingers like mud then quickly dry out to a dusty soil type consistency (hence it is obvious that it actually contains water, rather than just being dark in colour for some other reason). I am contemplating the possibility that this mortar which has turned almost to a slurry, could have caused some movement in the wall due to compression over time. The small compressed distance per joint could add up to a more substantial amount when multiplied by the number of courses affected.

There is mould growing on the surface of the cement sections , possibly due to high humidity levels causing condensation on the cold, damp cement on a north-facing external wall. Not only is it holding in moisture, it isn’t preventing manifestations of damp internally either! This is such a terrible thing to do to a house & should never be necessary or even considered in my opinion. The root cause of the damp needs to be identified and dealt with at source.

The rest of the lime plaster was removed from the upper sections of the wall & along with the remaining welded-on cement areas, by myself and Ian in approximately 7 hours on 31/07/2017. I would say that the cement took around 80% of the time even though it was a relatively small section.

Some of the lime plaster was well adhered, but it was still relatively simple to remove. This type of victorian lime plaster was ‘cut’ with a type of ash which was likely scraped from the inside of local blast furnaces. It would have had a pozzolanic effect, creating a quicker set for the lime mortar.

Dark black in colour and incredibly dusty compared to other types of plaster and mortar, being made up of lightweight dark sooty particles that stay airborne for a long time. It is easy to underestimate how messy everywhere will get, including yourself. It leaves a strange sticky feeling in your hair – I believe the alkalinity raises the cuticles on the hair shaft. A well-fitting rubber or silicone type respirator is essential for this type of work if you want your lungs to stay in good working order. Despite our careful attempts to contain dust & my insistence on always wearing a mask I quickly suffer from a bad cough and asthma symptoms whenever we disturb this material since it easily travels around the house.

Here is another original wooden corner bead on the fireplace supported by the traditional (and superior!) method of fixing with a twisted wooden peg or dochen

This one has become too compromised by rot on the lower section to be re-used, but we will replace it with a similar timber corner protection baton – possibly with a curved profile – prior to re-plastering. Metal beads create an unnaturally crisp, cold, stark edge in an older property like this. Timber is warm, strong, flexible and vapour permeable. Where possible, retain any original timber you can – it is much better quality than most modern timber – slow grown and dense, with a tight straight grain.

Next we will look at carefully unblocking the fireplace to reveal the ‘builders opening’. 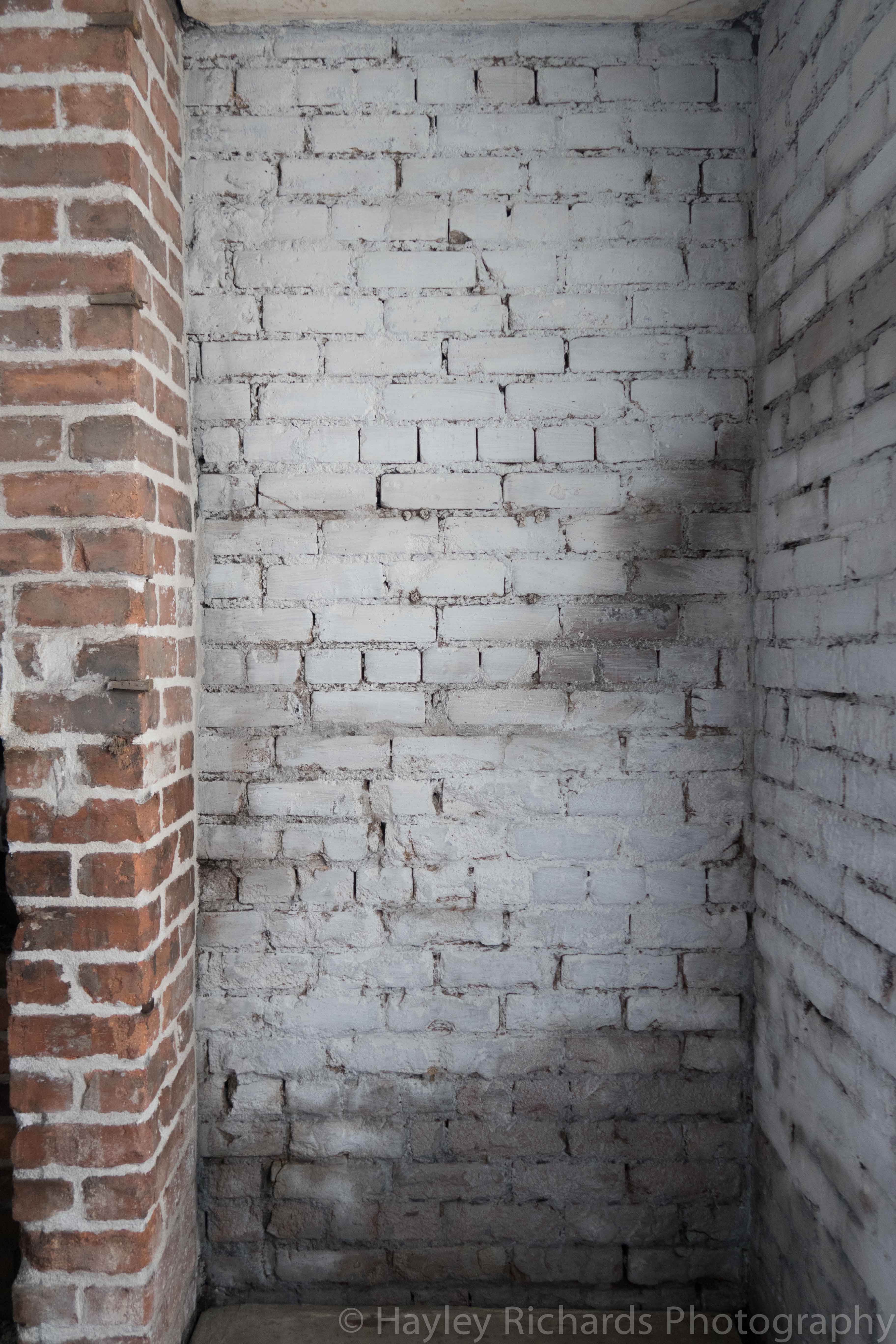 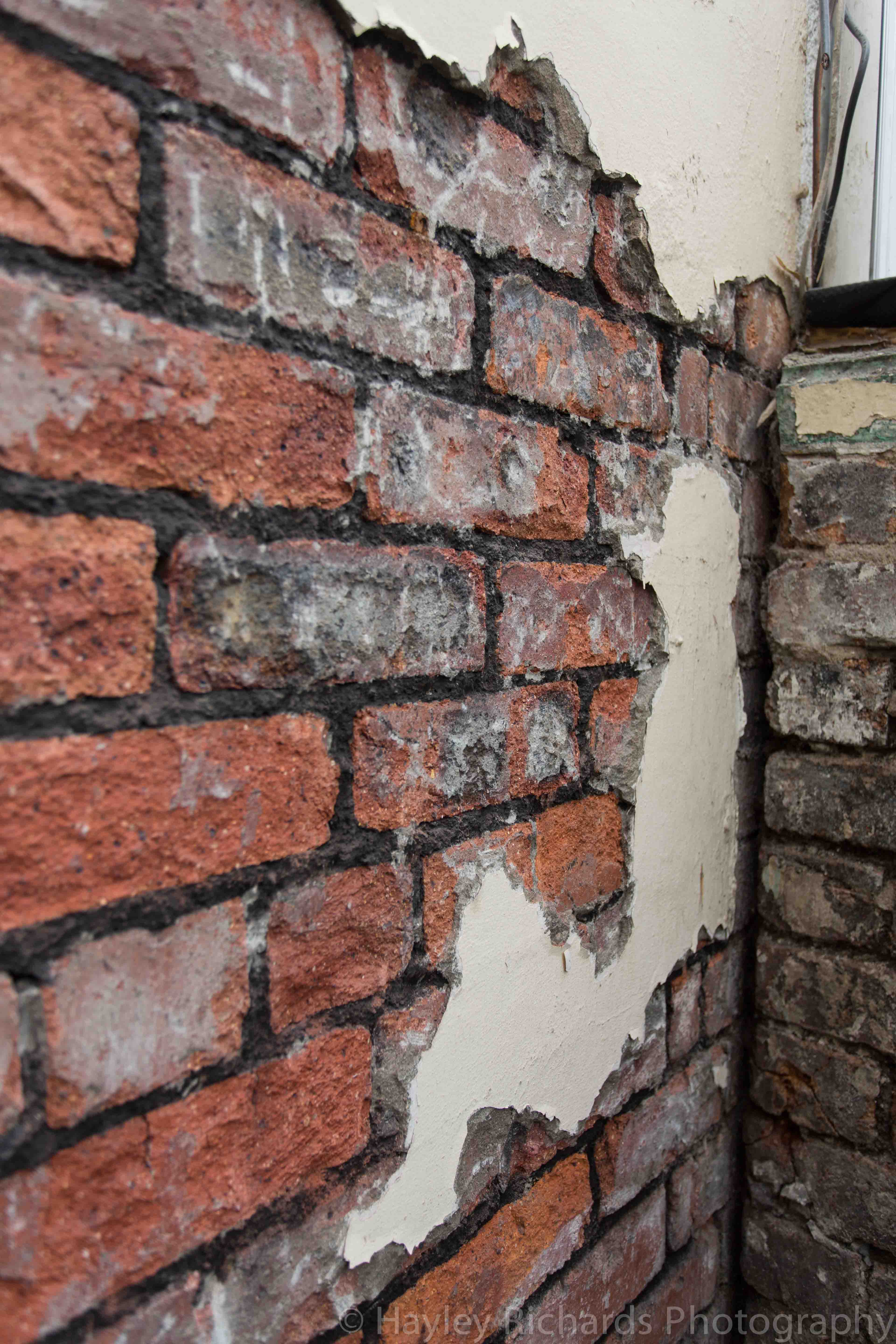 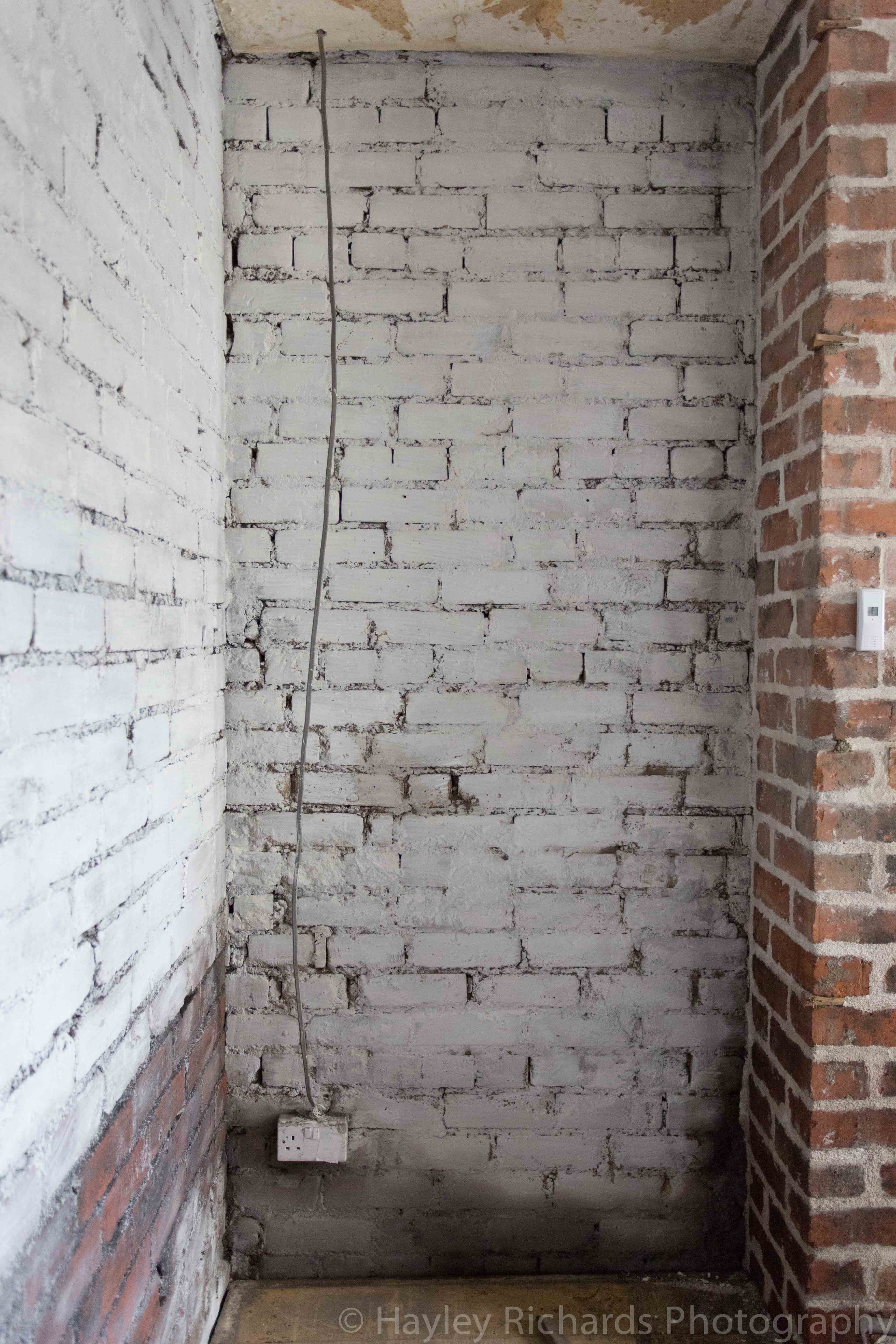