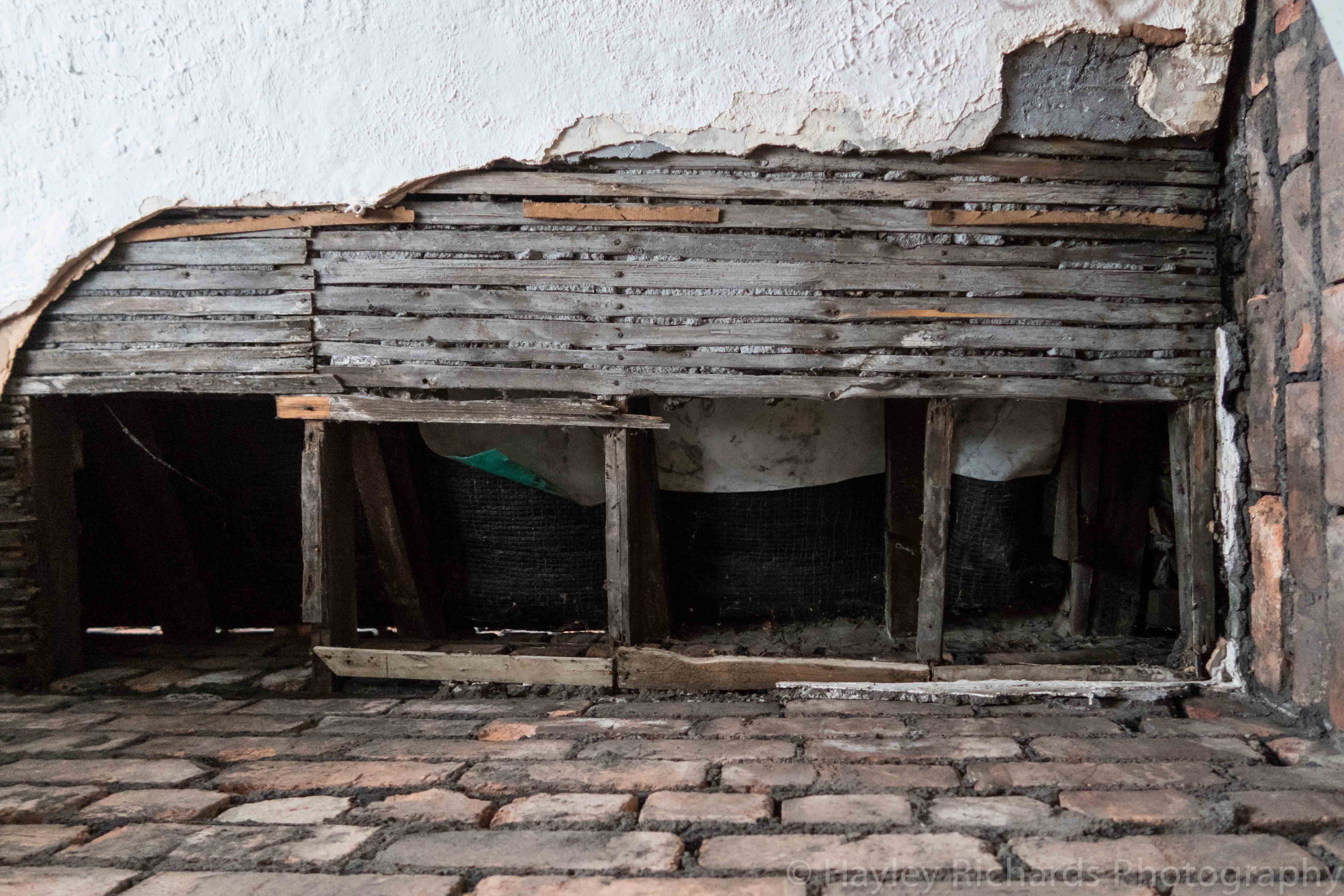 After the first day of installing hempcrete and hosting a workshop with the help of returning practitioners, disaster struck!

Despite being exhausted, we had decided to crack on and attempt to get a few more hempcrete mixes in the lounge wall before we went to bed. As we were about to get going after saying goodnight to our visitors, we heard an almighty rumbling crash from upstairs. I have a pretty elevated startle response nowadays, but this was enough to make me shudder with anticipation and adrenaline.

I quickly ran through all the possibilities in my mind, with my worst fear being that the entire bathroom roof had collapsed. As Ian started heading upstairs, my inner health and safety officer kicked into gear and I insisted he take a minute to put on his respirator and goggles, and assume things were dangerous.

We could barely open the bathroom door and the light had gone off. Peering through the blackness caused by the thick soot-filled plaster dust, we managed to ascertain that the roof was intact, but a section of the artex, plaster and lathes along with accumulated bricks and lumps of concrete had collapsed and fallen to the floor.

After this I suggested it might make sense to seal the room as best we could and strip down to rid ourselves of as much of the dust as possible. Not having a bathroom to clean up in meant stripping down in the kitchen and attempting to scrub ourselves with damp towels to get rid of the worst of the black coal-miner look.

Ian valiantly sealed the bathroom with bin liners to try and ensure the dust mainly settled in the bathroom itself, whilst I had a mini breakdown! I couldn’t stop thinking about how I had feared this happening ever since I moved into the house due to the cracked, bowing nature of the ceiling, yet I had been told not to worry about by several people & that it could wait. For over a year I had showered with my head touching the ceiling, worrying I would be found trapped under the rubble of a collapsed roof! Although I was catastrophising to some extent, the fear turned out to not be completely unfounded – which made me think some of my other worries may be more rational than some had suggested. I felt frustrated I hadn’t listened to my own intuition & instead had yet again deferred to those expressing certainty and diminishing my concerns.

I felt so terribly guilty and frankly quite ill at the thought that someone else could have been in there and hurt when it fell. Luckily that hadn’t happened. However, my fears about the possibility of there being asbestos in the artex had resurfaced with a vengeance despite being reassured by someone who’s advice I greatly appreciate and value.

Due to this concern and my own stress levels, I seriously considered running away, finding a hotel for the night and maybe just giving up entirely! I struggle with social interaction at the best of times, so the idea of having to focus on the hempcrete install on an open day and interacting with people whilst so exhausted and frazzled was terrifying.

After making a panicked 1am phonecall to someone more in the know about these things, we worked out that we could probably not worry too much about the electrics – which was the most pressing concern. During the phonecall, the shock reaction made my throat start to tense up & I could barely get the words out so I had to pass it over to Ian!

The next morning, after very little sleep; we were both like zombies barely able to function by the time David & Simon arrived. David incredibly kindly and selflessly – decided to clear the mess upstairs so we could use the bathroom again whilst Simon distracted me by being his usual chatty self. I am eternally grateful to David who helped in more ways than the practical gesture. I was so dysfunctional I struggled to organise my mind to even prepare him a sandwich for his journey – I literally felt like I was wading through mud just to form thoughts or words or move my limbs! I was so emotionally fragile and that gesture of kindness meant so much.

As the day progressed, we managed to continue with the hempcrete install, and with Simon’s help did 2 or 3 mixes & got up to the windowsill. The previous day we had done around 2-3 mixes and got approx 45cm up the wall.

Over the next couple of days I attended a plastering workshop with Neighbourhood Construction. I was exhausted, but I am very glad I didn’t run away… the show must go on.

Temperatures dropped over the following days, just to make things even more fun in the bathroom. Still, taking down the rest of the ceiling will keep us warm! 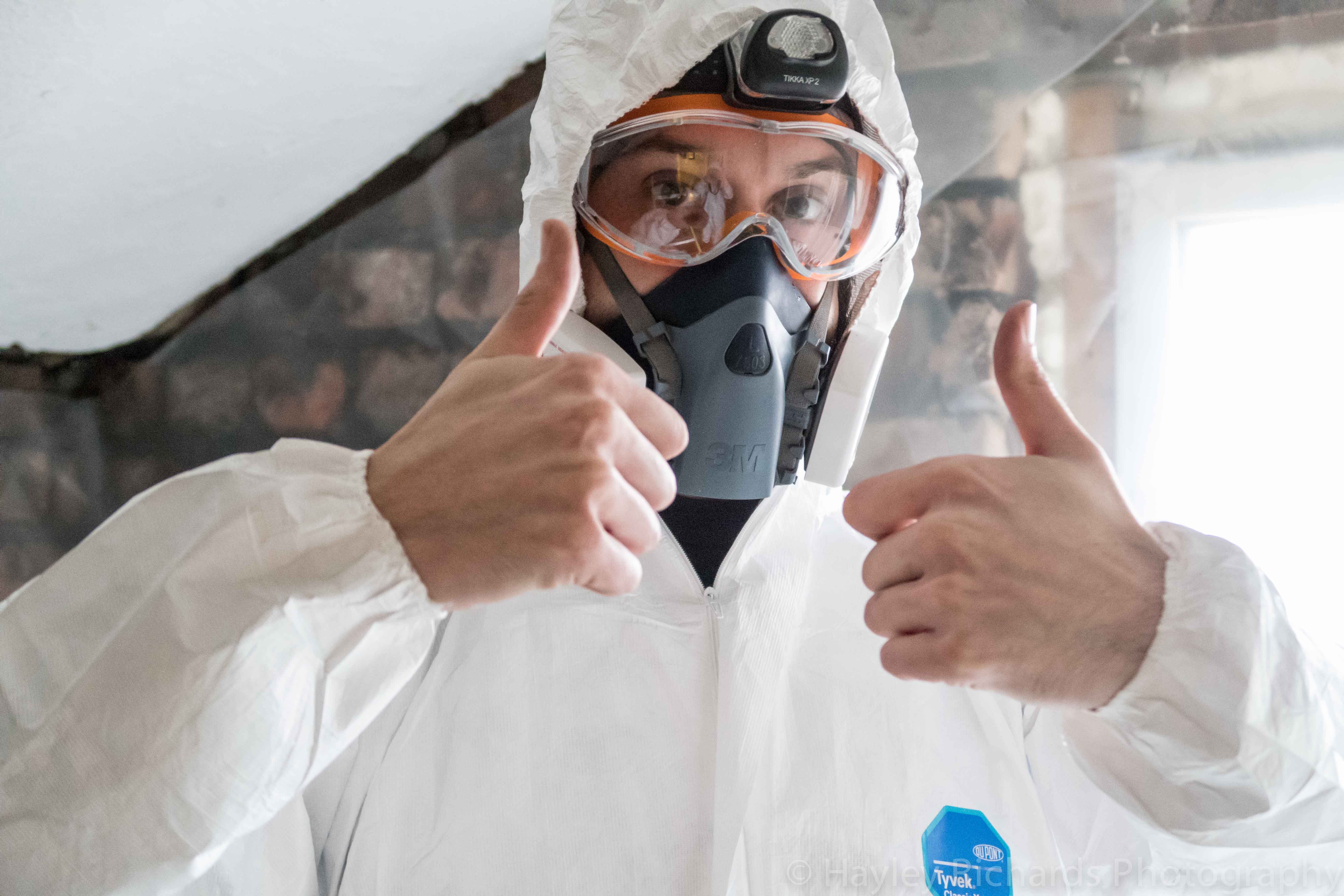